The market has had a helluva run so far in October.  The SP500 is up 5.8% for the month and seems like an eternity ago when we were warned by billionaire Carl Icahn.  However, resistance lies ahead. The SP500 faces a significant amount of possible overhead supply that starts at 2040 level; the same can be said for the Nasdaq.  The Russell 2000 has been the weakest so far with a series of lower highs and lower lows though there is the potential of the most recent low holding.

Quite frankly, I don't see many proper set-ups, and we are in just entering earnings season that makes things somewhat dicey.  With the indices at potential resistance, the lack of set-ups and the fact that we are in the middle of earnings season I believe the best course of action is to focus on the stocks that have reacted well to their earnings report.  By well I mean a stock that jumped 4% or better after they reported.  After the initial thrust what we would look for the stock to consolidate and give us a proper entry, $MDR is an example of one that we took a few quarters ago. 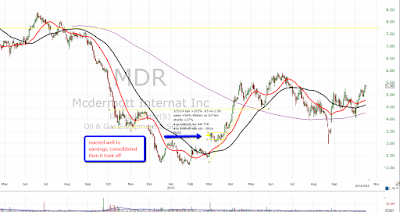